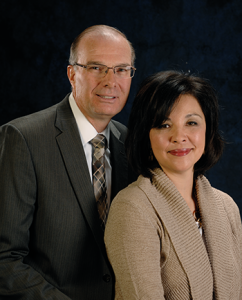 In 1995 Dan and his wife, Juanita, moved to Greeley, Colorado for the purpose of planting an independent, fundamental Baptist Church. Westside Baptist Church held its first service at the Christa McAuliffe Elementary School on September 10, 1995.

Dan was born in Hutchinson, Kansas. As a child he grew up in Omaha, Nebraska for nine years and then in rural Nebraska and Kansas. He was reared in a Christian home and accepted Jesus Christ as his personal Savior at the age of eight. Believing the Lord had called him into the ministry he attended Bob Jones University in Greenville, South Carolina where he earned a Bachelor’s degree in Bible, with a minor in Greek, in 1981 and a Master’s degree in Bible in 1983. Upon his graduation in 1983 he remained at Bob Jones University holding various positions such as the Information Desk Supervisor, Student Recruitment Coordinator, and University Registrar.

Juanita was born in Huntsville, Alabama. She was saved at the age of 9 at Vacation Bible School at Meadow Hills Baptist Church (now Calvary Baptist Church). At the age of 16, she dedicated her life at The Wilds Christian Camp in Brevard, NC for full-time Christian service. In order to better prepare her for the ministry she attended Bob Jones University and majored in Practical Christian Training with a minor in Secretarial Science.

Dan and Juanita were married in 1990 and have three sons: Benjamin (wife Jamy), Barak (wife Carissa), and Jesse and two grandsons.